Oh no, Debra J. Saunders is looking at gentrification now

Oh God.  You know what that means.  A quasi-libertarian word salad and some unfocused jabs at "the left."

The piece is called, for no particular reason other than, I guess, to recycle a 15-year-old movie catchphrase, "I see rich people."  It starts off like so:

In the Star Trek movies, San Francisco serves as headquarters of Starfleet Command. This cracks me up no end, as I cannot imagine the Board of Supervisors approving construction of Starfleet Academy or the oddly shaped high-rises you see in the background. And if City Hall somehow did approve the project, you know there'd be some ballot measure to kill the deal. The grounds could be endless: No photon torpedoes. Too many techies already. What about affordable housing?


Debra, look away, because Salesforce Tower is already underway: 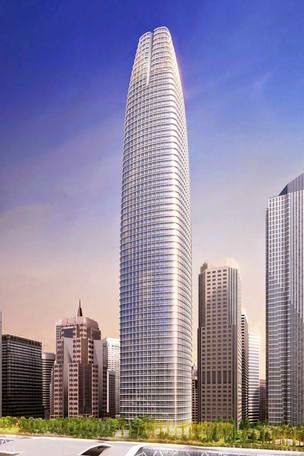 Deb moves on through some well-trod ground, including 8 Washington and then the fact that she can't afford to live in SF, then mentions Kim-Mai Cutler's incredible article in Techcrunch, "How Burrowing Owls Lead to Vomiting Anarchists (Or S.F.'s Housing Crisis Explained)."  Then we get these curious paragraphs:

Cutler also supports proposals to make it more expensive and difficult for owners to evict paying tenants. There's a price for that approach. In a city with more renters than homeowners, do you want to be the chump who buys a duplex when City Hall can tell you want you can and cannot do with your own property? (Keep in mind that this City Hall won't let retailers give away paper bags.)

Groups like the Mission Yuppie Eradication Project stage protests to send this loser message: "The Yuppie dot-com lifestyle must be fought and eliminated, because if it is left unchecked, it will eventually ruin our neighborhoods, our cities, and our planet." They ignore the fact that the Mission is happening now in part because of the influx of tech money.

Most working people want to live in a neighborhood where residents spruce up buildings and keep the streets clean. Who is most likely to do that? Homeowners.


Para 1: Judging by the current real estate market, there appears to be no shortage of people who want to be the chump who buys a duplex.  If Deb's logic was on, duplexes would be dirt cheap.  I haven't checked lately, but I don't think that's true.  BONUS POINTS for any mention of the plastic bag ban.

Para 2: I don't think the Mission Yuppie Eradication Project has existed since the first dot com boom, sweetheart.  And have you walked down Valencia lately?  It's over, and the yuppies won.  (Sadly, they never managed to eliminate "Neighborhood enemy number one," Beauty Bar.  We can still dream!)

Para 3: I was wondering why the streets are so dirty!  Now I know why: RENTERS.  Why can't you clean up after yourselves, you dirt-loving planet destroyers?

But I don't think it would hurt for San Franciscans to reorient their thinking to make this town more livable for the middle class. Last week, I walked from City Hall down Market Street at dusk with a friend from out of town. It stank, the police had a couple of people in handcuffs, and the mood was downright eerie. Yet the left in this town thinks Twitter is bad for San Francisco.

People pay top dollar to live near what only can be called squalor. Those Yuppies whom anarchists hate pay $700,000 for a condo in a neighborhood where they have to step around street people on their way to work. And the Yuppies rarely complain until a neighbor wants to rent to out-of-towners through Airbnb. Then suddenly they are outraged, and their quality of life is threatened.

Let's unpack that first paragraph, because it's the Italian opera of SFGate columns: it sounds pretty, but I can't understand a fucking word.  OK, first, yes, it wouldn't hurt to make the town more livable for the middle class!  Yes!  Great!  How do we do that?  Wait, now we're walking down Market Street and something something the left hates Twitter.  Wait, what?  I learned in 6th grade English, Debra, that the PARAGRAPH is supposed to flow from the TOPIC SENTENCE.  You don't write "Argentina is a land of many features" and then follow it up with how you flew over Mexico once.

The second paragraph has no coherent thought at all.  People pay a lot of money to live in a bad neighborhood.  Then they complain when someone uses Airbnb.  WHAT IS YOUR FUCKING POINT.

It's fine to have problems with current SF housing policy, but for fuck's sake, if you're going to go public with them, write some coherent arguments down instead of a bunch of disconnected phrases that floated through your head.
TK at 9:28 AM